"Our aim is to provide every customer with the best selection and finest service, so that when they think of satisfaction, they'll 'Think Ancira.'"

This statement embodies the business philosophy that makes our company dealerships the successful enterprise that it is today.

Our business philosophy is based upon both employee satisfaction and customer satisfaction; we understand the importance of retaining our client base to create “customers for life.”

Someone once said, “An entrepreneur is an individual who jumps off a cliff and builds their wings on the way down,” Ernesto Ancira Jr. recalls.

During every man and woman’s struggle to attain greatness, they are bewitched by the wisdom that becomes one’s harness to success. Ernesto’s life seems to echo this conduit to freedom, when a true leader finds there’s no reward without risk. The road to entrepreneurial enterprise is lost if its leader possesses vision without action, hope without tenacity or foresight without a defined mission. When one sets his sights on lofty endeavors, long term success is only found by those who exemplify a manner which extends a true humility for humanity. These are the characteristics of a leader. These are the qualities of Ernesto Ancira Jr. 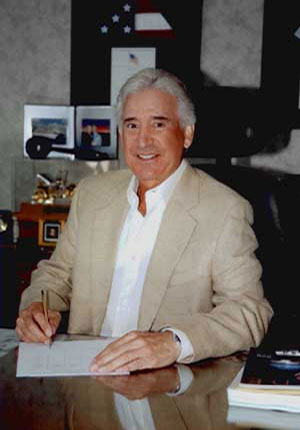 The San Antonio native, who branded his automotive empire into a household name, still asserts a gentle humility, which he says is based on the gratitude he holds for many people who significantly touched his life, both on a personal and professional level. Ancira’s legacy has lined a commitment bestowed by those who represent the Ancira brand; the people behind the operation who dedicate long hours to a team vision that is unsurpassed. "Everything you do involves a team effort.” Ernesto asserts. “You can’t work individually, you must know your limitations. But if you surround yourself with people who compliment your abilities and talents and who cover your shortcomings you can put a whole team together. I may not know how to personally overhaul an engine, but that doesn’t mean I don’t know how to put together the best shop in town.” That’s what Ancira set out to do over 30 years ago, and that’s exactly what he has accomplished today.

Ernesto moved to Mexico City with his parents at the age of 3. More than 20 years later, after graduating from St. Edwards University in Austin in the late 60’s, he again returned to Mexico to work for his father, another Entrepreneur. Ernesto’s father encompassed all the passion and dedication required of a self made man, yet lacked a formal education, which would later prove significant to Ernesto’s own success. “I had a good education,” Ernesto states proudly.

Education was a foundation to the opportunities that would later be presented to him. "That’s where I learned the value of teamwork,” he adds.

Before going into business for himself, Ernesto moved up the ladder by taking on high-profile positions with Gillette Co. and Kimberly Clarke de Mexico. This provided him with a strong platform to grow into his entrepreneurial endeavors. “In life you have to be flexible enough along the way to take advantage of opportunities,” he said. In 1971, Ernesto was offered a General Director position in Brazil. Since at the time he was married with small children, he was forced to re-examine his goals for the future. Would it be too great a sacrifice for his family? “It wasn’t the right choice for us,” he admits, Ernesto was on his way to the headquarters for Kimberly-Clark in Wisconsin when he stopped in San Antonio. At the time, General Motors was looking for a Mexican to run operations in the Alamo City. As a young educated man in his 20’s, Ancira embraced the idea of entering the automotive industry, “The decision was simple, ”There were no Mexican automotive dealers in San Antonio,” he says. “So I went after the chance.” It was May of 1971 at an old dealership downtown where the Ancira brand was born.

“I had to be flexible enough along the way to take advantage of opportunities,” he explains. ”Opportunities will always be there, but you have to know what to do with them and then have the courage to do what you need to do.” Ernesto gave up his home, sold his car, and virtually everything he had to embrace what would later become a multi-million dollar enterprise. “It was a lifetime change for me and my family.”

The next step was to relocate the dealership to northwest San Antonio off of Bandera Road. Back in the mid-70's the area was scarce, but Ernesto needed to find the right property to build his dealership. There were many personal challenges he faced simultaneously during his lifetime. “You always have to be reaching, have to be climbing, because the moment you don’t, you’ll begin to slide down.” He says, "It was a tough transition moving the store from downtown to the northwest and struggling to find the financing necessary. It took several years to get everything done,” he admits. In 1977, the Ancira dealership opened.

Today Ancira Enterprises encompasses 13 brands of automobiles, 12 San Antonio based dealerships, and three RV stores. “We work hard,” Ernesto says. “Employees come first because then everything will transition across.” The company experiences very low turnover, and promotion is only granted from within. Much of management has stayed loyal to Ancira for over 20 and 30 years. "They think long-term with us, it’s not about making a quick buck." He notes. “We take really good care of our employees and I think that reflects itself on the customer’s actual experience.”

It was never a question for Ancira to enter the industry. Throughout all the good decisions, and even the mistakes, he found what worked and what didn’t. “Not everything you do turns to gold,” he said. “But you have to be courageous enough to make those decisions.”

Of course, no man is an island, and it has taken some time, effort and dedication on Ernesto’s part. It also took some faith from a man Ernesto calls his hero. Quincy Lee, a leading developer at the time in San Antonio was the original owner of the 40 acres of land Ancira now owns. When Lee offered Ancira the land for 1.2 million, he didn’t have the money to pay right away but Lee shook his hand anyway and said to pay when he could. Even when offered $2 million for the same property a few weeks after, Lee stood by his promise to Ernesto, and it was then that Ernesto made a commitment to himself. “I told the man I was going to build a dealership and not sell it even if I could make a huge profit because I owed it to Mr. Lee,” Ernesto shares, ”I learned an important lesson that day about honoring your word. Mr. Lee is one of my heroes.”

Along with Mr. Lee, Ernesto credits the support and mentor-ship of very distinguished men who contributed to his growth as a businessman and human being. In the 1970’s when Free Enterprise was considered a “dirty word”, the San Antonio Chamber created the Free Enterprise Council to find ways to enhance free enterprise in the city. Ernesto was named Chairman; important figures like Allen Newell (Newell Salvage), Pat Zachary (founder of Zachary), and former Mayor Walter McAllister were on the committee. Ernesto was only 30 years old. “Why would these men listen to me?" He acknowledged. “But it taught me the bigger you are, the more powerful you are, the more humble you are. These are men who were very team oriented, results oriented. They were my mentors.” Another important figure in his life is Judge Sol Casseb, a legendary figure at the courthouse. “He remains a significant person in my life.” Says Ancira.

A Symbol of Integrity

As much as Ernesto had contributed to the automobile industry, he has devoted much of his time to the community as well. As the list of professional organizations, political titles and endeavors, philanthropic causes and community services encompass countless hours, and on his part, he says the number is irrelevant to what his involvement is all about. “You can let greed overcome you, but I’ve always felt it’s about making everyone’s life better at least that's what gives me satisfaction.” He continues to stay active in athletics, a lifelong passion. In fact Ernesto once held the record for the longest continuous play of racquetball totaling 61 hours nine minutes. His personal enthusiasm for sports and a particular interest in golf inspired the Seniors Tournament to San Antonio and he was part of a collaborative effort that started Golf San Antonio and the Valero Texas Open where Ancira was the Chairman.

Reminiscent of his several personal victories, struggles, challenge and triumphs, his attitude towards life plays out in his daily interactions with all those around him. He remains focused on the big picture, yet his commitment remains within the roots of his success. “We continue to seek growth as a company, but our focus is set on San Antonio," says Ernesto. “There are many advantages to having our team here where we have an established reputation.” His advice to impart to others is an imprint to his personal triumphs and philosophies. “I think the objective of any individual should be to see what you can do to enhance the quality of life. To have a nicer home, a better school for our kids, a better neighborhood and if we can do it together, we will continue to prosper for many years to come."

We know that you’ll find what you’re looking for at one of our fine Ancira Dealerships.