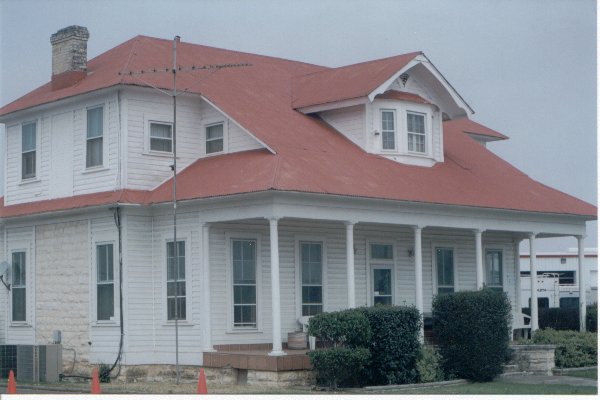 HISTORY: This large two story house on the north side of IH-10 four miles south of Boerne was built in 1904 by Gus Schattenberg. Gus was born in Germany and came to America at age 19. He married Anna Barbara Stendebach of Boerne. She was the daughter of John F. Stendebach, the talented rockmason/builder, and pioneer sheriff of Kendall County. On these 700 acres the family ran a nursery and in 1908 he established a large commercial pear orchard. Mr. Schattenberg was an innovative, self-sufficient man. He built a plant rooting cellar, a huge above-ground water tank to irrigate with, and a lime making plant for use when these facilities were being constructed. Among other projects, he transplanted some 300 cypress seedlings from the headwaters of the blanco River to the present riverwalk area in San Antonio.

The Schattenberg house had had several owners since the earlier family moved on to other achievements. In 1926 it was sold to the Wollschlaeger's, then the Patterson's, and in 1964, to R. M. George who renovated the entire structure. The house was purchased by Johnny and Janet Knaupp from Mr. George, then in 1979, they sold to Mrs. Marie Bradshaw Brown.

This home is now part of the Ancira dealership and plays an important role as our RV Service Department.